To share your memory on the wall of GEORGINA STOKOE, sign in using one of the following options:

Monday June 14th, 2021 in her 74th year with her family by her side Georgina’s Unbreakable Spirit passed away. She leaves behind her three daughters Sheryl (Colin) Osha, and Donna (David). Her eight gra... Read More
Georgina Marie Thomson (Stokoe)

Monday June 14th, 2021 in her 74th year with her family by her side Georgina’s Unbreakable Spirit passed away. She leaves behind her three daughters Sheryl (Colin) Osha, and Donna (David). Her eight grandchildren Emily (Alex), Hailey (Arvin) Sequoia, Jacob, Najai, Korae, Asha and Eshnee, as well as her sister Marilyn (Mel) and brother Fred (Brenda).

Georgina married Frank Stokoe in 1967, they were married for 34 years until his death in 2001. They loved each other very much, in the early years they travelled the world together and created many wonderful memories. They would start a family in North York, with an amazing house and backyard oasis with an amazing pool which would be the source of many amazing memories together as a family. After a move to Scarborough and raising her daughters she also started a daycare business in her home. This business grew where it became Vrandenburg Childcare Centre and is still in operation as of today. She was so proud of her accomplishment and her heart and soul went into the center. After the passing of her late husband she was blessed to find love again and married Earle Alam. Unfortunately taken to soon, Earle passed away shortly after.

Despite her physical challenges Georgina retained a child-like innocence and endless hope for improved health and more life. Her unstoppable, fiery spirit was often at odds with her physical reality and she continued to dream of all the things she wanted to do and experience until her final days. Perhaps only in leaving her body behind she is finally able to fulfill some of her dreams.

She spent her childhood playing in the creeks in Lynn Valley BC where she always believed she would return to one day. A part of her essence lives on there in the simplicity and wonder of those quiet places.

Receive notifications about information and event scheduling for GEORGINA

Donations are being accepted for: Canadian Osteogenesis Imperfecta Society.

We encourage you to share your most beloved memories of GEORGINA here, so that the family and other loved ones can always see it. You can upload cherished photographs, or share your favorite stories, and can even comment on those shared by others.

Posted Jun 19, 2021 at 02:18pm
I am sad that Georgina suffered for so long. she is now at peace but I will miss our conversations 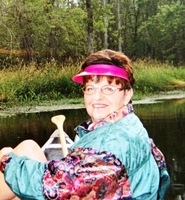